So proud to represent our professional and successful entertainment:

Saturday’s event was very demanding and Derek came through it with calm and professionalism. That crazy bride was drastically changing the playlist up to event time . . . I don’t know how he kept his composure. We love our (your?) Derek!"

Posted by Ray Bialek at 1:30 PM No comments:

Always pleased to hear more good news about our entertainment:

DJ Rich was wonderful. It was a pleasure working with both of your vendors and everything turned out really well for Kristen & Tim. I would greatly appreciate more brochures and cards to include with our wedding packets.

Thank you for checking in with me!"

Posted by Ray Bialek at 1:27 PM No comments:

Good review for one of our bands Doctors Orders:

I would like to extend big and sincere thank you to you and the entire Doctors Orders band members! You guys were amazing and everyone could not stop talking about how great the band was.
The entire evening was all that I had anticipated and more! The entire evening was fun and so very memorable. And working with you was a pleasure, thank you for touching base with me in advance of the event date to ensure all details and any special requests were met; throughout the entire planning process, I knew from the beginning that I had a great band set to perform - and you guys were a total crowd pleaser!!!! Amazing sound, great energy and the best selection of hits!!

Thank you again for everything and I hope to work with you and the band members again in the not too distant future!

Enjoy the last few weeks of summer and take care!


5.0/5.0
Quality of Service: 5.0 Responsiveness: 5.0 Professionalism: 5.0 Value: 5.0 Flexibility: 5.0
Michelle said...
We used DJ Dan for our wedding and could not have been more pleased. Our venue was a bit complex in that our ceremony was outside, the cocktail hour was inside and outside, the speeches were in one room, and the dancing was in another room. DJ Dan was absolutely perfect. He made it so that your outdoor ceremony was able to heard by every guest, the cocktail hour and dinner music was perfect, the speeches/microphones were flawless, and the dancing... the dancing was AMAZING. Truly, I would say 90% of our guests were on the dance floor for the entire evening from beginning to end. The music was absolutely perfect and kept the party going all night. DJ Dan was incredibly professional, very responsive and easy to work with. Hands down one of the best vendors that we selected for our wedding and I would recommend him to anyone looking for a DJ. Thank you, DJ Dan!!!
Bialek's Music responded with the following comments:
Thanks Michelle, congrats and best of luck to you both!
Posted by Ray Bialek at 9:48 AM No comments:

Another Great Wedding For Doctors Orders!

Want to join in the fun? Hire Doctors Orders through Bialek's Music for your wedding!

Good news from happy clients, use Bialek's for your events as well!

Thanks for all the hard work you put in, it was a hot and a busy day, but I think the client was very pleased. I have had very positive feedback from all parties involved. Look forward to working with you again in the future!
It’s always a pleasure to work with someone from Bialek’s.

Enjoy the rest of your summer as well!"

Posted by Ray Bialek at 9:35 AM No comments:

Keep the positive reviews coming! Remember we do uplighting and photobooth as well as bands and DJ's.

Excellent DJ for my wedding

Reviewed On 6/24/2015 Erica H
"We had our wedding at the Westin Arlington Gateway on June 13, 2015 and we had the pleasure of working with DJ Brennan Sullivan from Bialek's Music. We live in San Francisco and planned a wedding across country and they were able to make planning and the actual day so easy. DJ Brennan was fantastic. He was able to feel the crowd out and make the night exciting for everyone. I recommend him for any event that you may need. We also used Bialek's music for the uplighting and photobooth at our event. The staff that set up the lights and photobooth were extremely professional and friendly."

Good feedback from Denise Borland for the Chamber Reception.

Thank you again on your sponsorship of the Chamber Reception on June 25th. I hope you enjoyed and were able to network with new clients.

Have a wonderful day and I look forward to promoting your business!"

Always happy to be a part of successful events! Read this email from Christina Grimes:

We, the Completely Yours Events staff, would like to send out a gigantic "Thank You" to all of the vendors that participated in the McFarland-Purcell Wedding Ceremony and Reception this past Saturday. You truly helped bring the "Complete Experience" to the couple while ensuring that it was a memorable and special day for all the family and friends!

We are always amazed at the beautiful things that take place when everyone makes a collaborative effort to provide exceptional service to the client. The look of extreme satisfaction on our clients' face is what makes this industry so rewarding. We are very grateful to all of you for working so seamlessly with us for this event!

We would also like to ask you to take a moment of your time to visit our Facebook Fan Page and our The Knot and Wedding Wire storefronts to drop us a line and connect with us! As with all of our clients, we would like to guarantee professionalism and courtesy to all of our vendors. In the spirit of sharing, we would appreciate this gesture and we would be happy to return the favor!

Again, here is to everyone for placing a smile on Lauren and Nathan's faces!"


Response from Michael Moon after booking DJ Dave Battey through Bialek's music! DJ Dave worked a surprise 50th birthday party at the Bridges Restaurant on the waterfront of Wells Cove. A great place for seafood and pizza and also has a bar, deck, and dock area! Even though they didn't receive the best weather, Moon was still optimistic about his entertainment for the event.

He was a professional and did an excellent job adapting to the conditions we had at the restaurant (foul weather). I enjoyed working with him.

Thank you for the follow up . I appreciate you professionalism and the band definitely reflected the same not only in their performance on stage but off stage as well. Thank you for having such a fabulous team that was willing to work with us thru the entire night and kept not only our job easy but everyone on the dance floor!

We are so proud to have encouraging reviews on yelp, check out our latest one from Tracy R. in Virginia!

"We worked with Bialek and DJ Brennan Sullivan in particular for our wedding day, and we could not have been happier with our choice. Bialek was very helpful in guiding us on our lighting, photo booth, and DJ contracts, selecting high tech lights that offered an array of options for the uplighting during the wedding that captured the mood during each part of the wedding. We were initially hesitant to order a photo booth just because of utility, but it turned out to be a hit at the wedding and working all three through Bialeks made the whole process much simpler. Brennan was very helpful in guiding us for picking our ceremony, cocktail, dinner, and dancing with various options for each part and portion. He adhered to our do not play requests, and masterfully captured the mood of the crowd throughout the night, playing hits from across several decades. Guests throughout the night came up to us and could not believe how much fun they were having dancing, some even saying that "was the most dancing I have done in years!" DJ Brennan was very familiar with the acoustics in our venue (Carnegie Institute for Science), making the overall sound quality perfect during the ceremony, various toasts, and the dancing. Even at the end of the night, Brennan checked with us to make sure that all the songs we wanted to play were played. There was one song that my brothers really wanted to play, and after asking if that was okay, he without hesitation played the song, much to everyone's excitement. Afterwards, he asked if there was anything else we thought of, had issues with, and genuinely sought our feedback on his performance, which was nothing short of perfect. Overall, Bialek s customer service, multitude of options, flexibility, and experienced DJs make the company a perfect selection for your wedding and party event!"

Check out the link below for the rest of the reviews!
yelp reviews

Another praise report for the Palm Strings!

"They were great as always! They were also here last weekend for the wedding. I think I tell every bride to book them ;-)."
-Lisa Tenges Adams, Catering Manager, The Army and Navy Club

Posted by Ray Bialek at 9:07 AM No comments:

Bialek's music is so excited for the new piano program occurring at the gorgeous St. Regis Hotel in D.C. Come out for refreshing drinks, good music, and even better company! Happening currently every Tuesday-Saturday for the rest of July and August so there are no excuses to not make it out for at least one day. Trust us, you will not want to miss out on this! 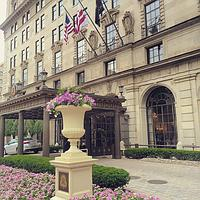 Posted by Ray Bialek at 8:24 AM No comments:

So proud to have been a sponsor for the Judith A. Lese Breast Cancer Foundation!

On wednesday, July 8, 2015, the Judith A. Lese Breast Cancer Foundation hosted its 13th Annual Fundraiser Dinner at Maggiano's Little Italy in Chevy Chase. Guest speaker, Dr. Saadeh, a board-cdertified, clinical geneticist spoke on "Breast Cancer and Genetics". We are so happy to have helped Foundation to promote the saving of lives through the pursuit of education and cure for breast cancer.
Posted by Ray Bialek at 8:09 AM No comments: